The report provides an up to date perspective of what’s working on Instagram for brands right now – and with Instagram’s algorithm always changing, and experiments like hiding total Like counts in play, the Instagram landscape is shifting fast.

Here’s a look at some of the key findings from the report.

First off, Quintly’s researchers found that, despite the rising popularity of video content, images remain the most popular post type for brands on the platform, by a significant margin. 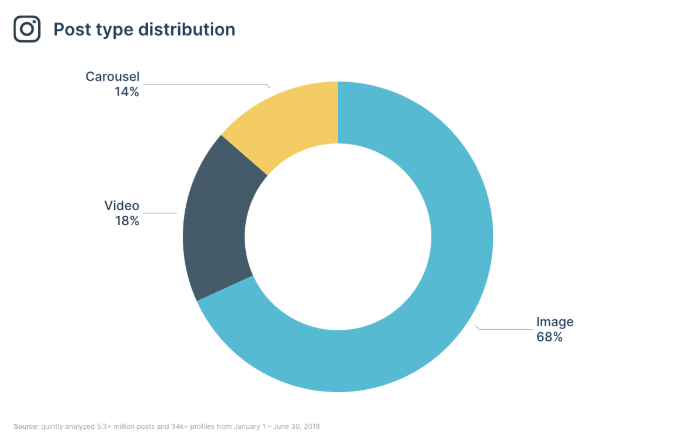 That’s not overly surprising – its easier to create good-looking still image posts than it is to come up with, and create, good videos. But still, the popularity of image posts over videos – and, as you can see, carousels – means that a lot of businesses are missing significant opportunities on the platform, as Quintly’s further insights show. 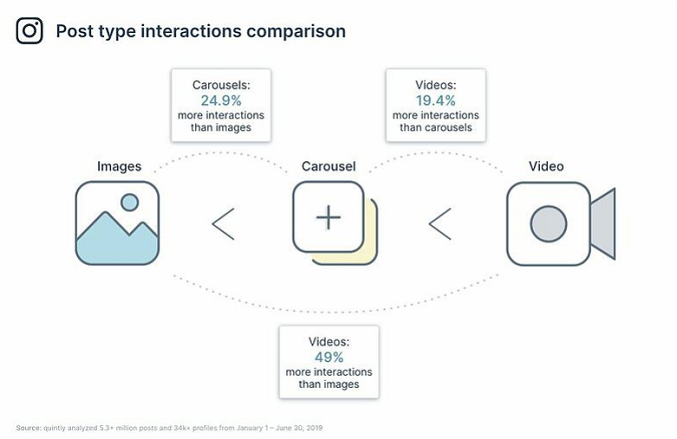 Clearly, brands should be looking beyond image posts if they want to maximize their Instagram performance, with even carousels seeing significantly more engagement than images. Worth considering in your 2020 strategy.

Beyond post types, the next key creative element Quintly’s team looked at was captions, and whether caption length correlates with improved post performance.

As per Quintly’s data, the majority of brands use more than 150 characters for each of their post captions, with many using over 300 characters in their updates. 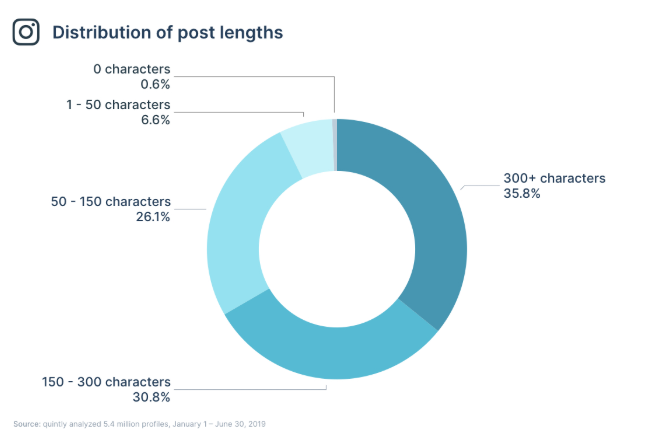 Is that a good move?

Interestingly, for larger profiles (those with between 1 million and 10 million followers), Quintly’s data showed that no caption at all was the best option to spark engagement, but for everyone else, captions of between 1 and 50 characters saw the best response rates. 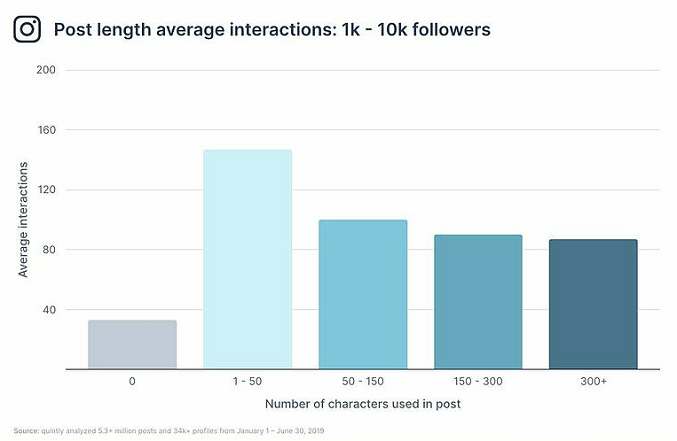 So shorter captions is better, and many brands are not currently adhering to this.

Quintly also looked at the use of emojis in posts, and whether they can help brands drive engagement. Quintly’s researchers found that the majority of brand profiles are currently not using emojis in their Insta post captions. 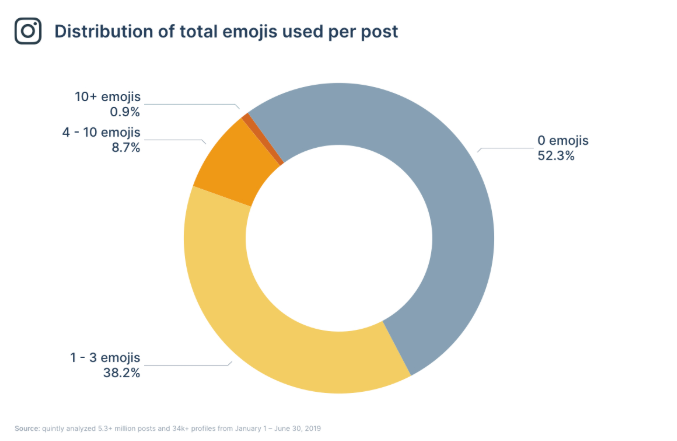 But they probably should be – according to the data, “the higher the number of emojis used, the higher the amount of interactions.” 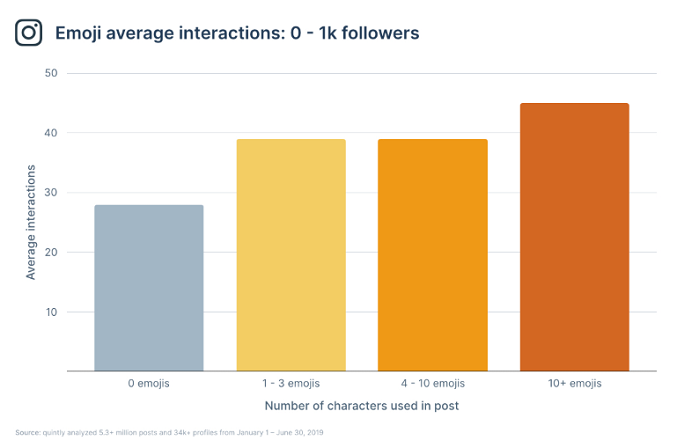 Emojis may feel unnatural for your brand posts, they may not feel authentic or professional enough. But the numbers here would suggest that they are worth trying, at least in some capacity, with posts with no emojis seeing the lowest average interaction rate.

And the last major element of Quintly’s study looks at hashtags, and how many hashtags is the right amount to maximize your brand post engagement. 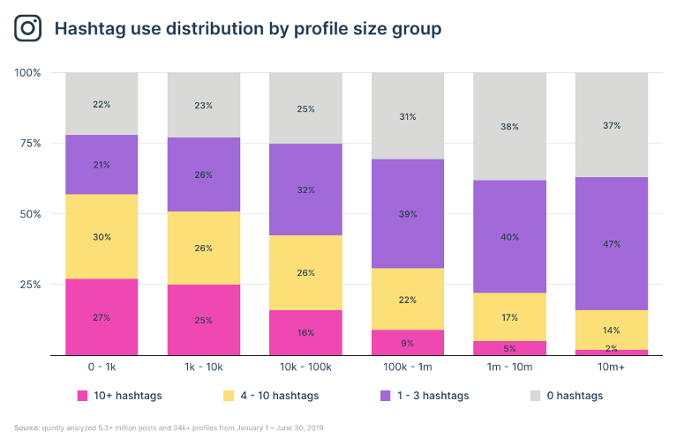 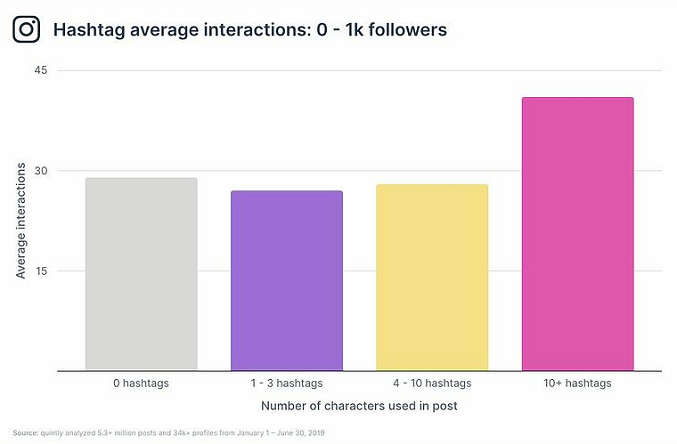 The bigger your audience, the less you’ll need hashtags, but for the majority, using more hashtags looks to be a better way to go.

But then again, that does also contradict another report that Quintly published in November last year, which suggested that using no hashtags at all was a better way to go. 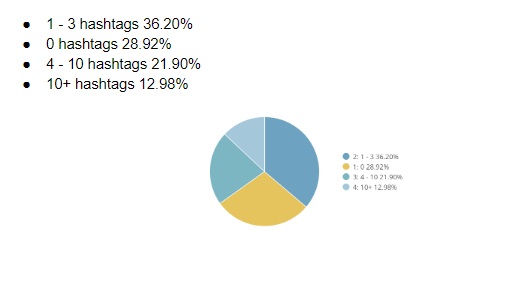 This is likely a result of combined data. In its report last year, Quintly gave an overall assessment of hashtag performance, which included profiles that had more than 10 million followers. As noted, for these larger profiles, Quintly’s data does actually show that more hashtags is not necessarily better, in regards to performance. 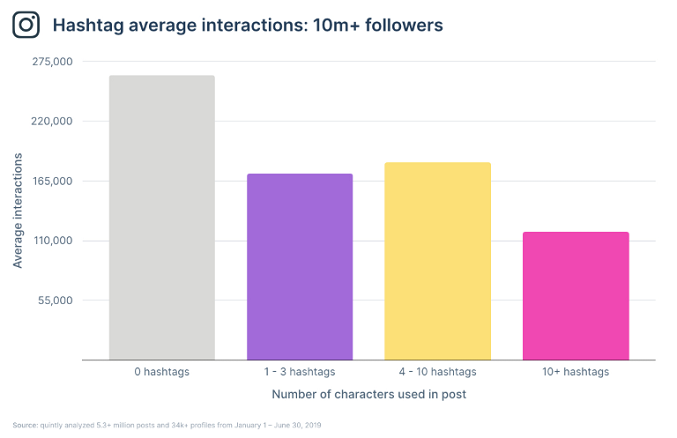 That’s almost the inverse of the chart for smaller profiles, and in combination, it may well be the case that, overall, fewer hashtags is better. But in order to get a real assesment of performance, you need to separate out the results for smaller versus larger followings – and really, it makes logical sense than smaller profiles will need the added exposure that hashtags can provide much more than larger profiles do.

But why do larger profiles see fewer interactions when they add in hashtags? Maybe their audience see this as less authentic, maybe Instagram’s algorithm doesn’t reward larger profiles with distribution via hashtags in the same way. It’s hard to pinpoint the precise logic here, but its another element to consider in your experiments.

As an aside, a recent study from Social Insider also showed that including your hashtags in the main caption was more effective than adding them into the first post comment.

There’s a heap more data in Quintly’s full report, which you can access here. How your brand performs on Instagram will come down to the various, specific elements you choose to enact, but these findings will help you to improve your experimentation, and get down to a more focused approach which maximizes your results.

How to Use LinkedIn to Target Professionals That Will Advance Your Business
September 17, 2019
YouTube Launches a Fashion “hub” for Style Content, Fashion & Beauty
September 5, 2019